Even before these requests, the leaders of these companies appeared on television shows arguing for another round of boosters for everyone — but without much evidence to back up their claims.

That did not deter the F.D.A. The agency said on Tuesday that adults aged 50 and older could opt for a second booster shot of the vaccines made by Pfizer-BioNTech or Moderna, to be given at least four months after the first booster of any authorized or approved Covid vaccine.

In addition, the C.D.C. now says that all adults 18 and older who received two doses of the Johnson & Johnson vaccine may also opt for a booster dose of an mRNA vaccine. The agency said it was basing its recommendation in part on a new study showing that two doses of the Johnson & Johnson vaccine offered less protection against Covid-related urgent care and ER visits than an mRNA booster.

Will the announcements make any difference in the torpid vaccination rates in the country, especially with cases still on a steady decline? Less than half of the adults in the United States chose to get a booster shot even when the virus was ravaging the country, noted Dr. Saad Omer, director of the Yale Institute for Global Health.

“Our first booster coverage is very, very, very low compared to where we needed to be,” Dr. Omer said.

Instead of doubling down on a flawed approach, federal officials should take advantage of the lull in the pandemic to explore the best immunization strategies, he said.

“Any career public health person looking back and looking at the current coverage of the first booster would say, we need to have a sober assessment of what we need to do differently,” he said.

What do scientists think about second boosters? 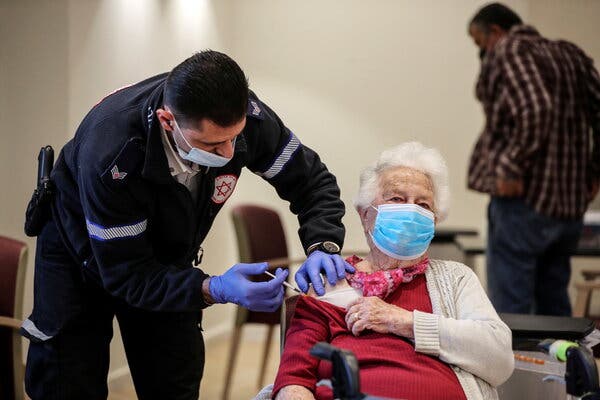 Many scientists are dubious about today’s decision.

The F.D.A.’s authorization allows anyone over 50 to receive a second booster. But experts pointed out that the limited research so far supports a fourth shot only for those older than 65 or who have underlying conditions that put them at high risk.

The most compelling data comes from an Israeli study that found that adults older than 60 who got a fourth dose were 78 percent less likely to die of Covid than those who got only three shots. The study was posted online last week and has not yet been reviewed for publication in a scientific journal.

“The Israeli study, in terms of mortality rate, is decisive,” said Dr. Robert Wachter, chair of the Department of Medicine at the University of California, San Francisco.

But that study, while it offers the only evidence, is deeply flawed. The participants all volunteered to get a fourth shot — and are likely to be people who are naturally careful about their health, said Dr. Paul Offit, director of the Vaccine Education Center at Children’s Hospital of Philadelphia and an adviser to the F.D.A.

“Who makes the choice to get a fourth dose? Someone who is attentive to their health, who’s more likely to exercise, is less likely to smoke, is more likely to wear a mask,” Dr. Offit said.

These other factors may make the booster shot look more effective than it actually is. In fact, other data from Israel suggest that a second booster has only marginal benefits in healthy young people.

“It’ll be short-lived, so I think the timing is going to be key here,” said Marion Pepper, an immunologist at the University of Washington. “If it’s not going to create a long-term, better quality immune response, then you question the value a little bit.”

Dozens of studies have now shown that most people are already well protected from severe illness. Even confronted with Omicron, a variant that can slip through immune defenses and infect people, two or three doses of the Pfizer-BioNTech or Moderna vaccines proved powerful enough to prevent severe sickness in nearly everyone, according to a recent C.D.C. study.

Most vaccinated people who became severely ill or died were older or had health conditions that compromised their immune response, the study found.

So who benefits from a second booster?

Probably only people who are immunocompromised or older than 65, according to the limited evidence available.

“If you’re more than five or six months out from your last booster, and you’re at high to very high risk,” the obvious choice is to get the shot, said Dr. Wachter.

“As a healthy 64-year-old man whose third shot was seven months ago, I will get one this week if I can,” he added.

Other experts were more circumspect about Americans rushing to get a second booster.

“I’m a firm believer in vaccines. I like the idea of physicians and immunocompromised and high-risk patients having options,” said John Wherry, director of the Institute for Immunology at the University of Pennsylvania.

But he balked at a blanket recommendation: “It’s hard for me to advocate making a decision about an intervention like this in the complete absence of data.”

Still, Dr. Wachter said he would recommend the booster for everyone who qualifies. The virus may only be thrumming along at a low volume right now, but it has not gone away. Americans who don’t get boosters may be leaving themselves or others around them vulnerable to infection, he warned.

Recent studies have suggested that Covid may damage the heart or brain. Although vaccination significantly cuts down the risk of long-term effects, the studies “are all lining up in a direction that says you don’t want to have this infection if you can avoid it, even if you’re 100 percent confident you’re not going to die,” Dr. Wachter said.

If the goal is to maintain protection against infection, Americans may need boosters every few months. Several experts believe that is an impractical and unrealistic approach.

“That’s not a public health strategy, it’s not a reasonable strategy,” Dr. Offit said. “It also assumes no consequence to boosting.”

Will a second booster prevent me from infecting others?

Nobody knows — yet. But it’s not unreasonable to think that it will help at least a little, at least in the short term.

Last fall, the Biden administration recommended booster shots for most Americans, in part to curtail spread of the virus. But the Israeli study in young people found that the fourth dose did not offer a strong bulwark against infection with Omicron.

The Pfizer-BioNTech vaccine had an efficacy of 30 percent at preventing infections with the variant, and the Moderna vaccine just 11 percent.

Still, reduced infections — to any degree — should mean lower odds that a boosted person will pass on the virus.

“There may be a short period of time — you know, one to three months — where you are getting increased protection from infection to some degree,” Dr. Wherry said. “That will of course then reduce transmission.”

Should I get the booster now? Time it to my summer vacation or the next surge?

The protection against infection from booster doses wanes quickly, in just a couple of months, so a booster shot now will not offer much defense in August or even July.

It takes the immune system about a week to rev up after the shot. From that peak, antibodies taper down over the next two to three months. So if you qualify for a booster, you may want to have the maximum protection right before your trip — or before the next surge.

“The one thing that matters is where we are in this whole pandemic,” Dr. Pepper said. “I would be watching what the variants are doing.”

Late last year, when the Omicron variant was ubiquitous, getting a booster made sense simply to prevent infections.

Dr. Wherry, who is 50, said he opted for a third dose even though he was not worried about becoming sick because getting infected would have been “extremely inconvenient” for his work and for his two children in high school.

“Right now as a healthy 50-year-old, I don’t see any need for a fourth dose,” he said. But he might revisit that choice if the case numbers tick up again.

Are there drawbacks to getting a second booster?

Maybe. The vaccines are overwhelmingly safe, so getting an extra dose is not dangerous. But there still may be disadvantages.

For example, each dose may induce side effects like fever, headache, fatigue and joint aches — “which, when you get older, aren’t always trivial,” Dr. Offit noted.

Repeated boosting also offers diminishing results. Dr. Pepper’s team has evidence suggesting that a fourth exposure to the virus — whether through infection or the vaccine — will not make immunity any stronger than it is after the third.

There is also some worry that repeatedly boosting with the original version of the vaccine will make the body less responsive to future versions. “When you’re boosting with the same strain versus different strains, you’re not getting the bang for the buck,” Dr. Omer said.

And there is some evidence that spacing vaccine doses farther apart, perhaps once a year, may produce a stronger, more long-lasting immune response. If that’s true, it would argue against frequent boosters.

I just had Covid. Do I still need another booster shot?

Probably not for a while, all the experts said in interviews.

“You can conceptually think about an infection like a booster,” Dr. Wachter said. “Folks who did have an infection in the last three months are likely as protected as if they got a second booster.”

Dr. Pepper’s team found that in people who had been infected and then vaccinated, even the first booster shot did not offer much of an advantage.

“You sort of plateau at some sort of ceiling of immunity with three exposures to the spike protein, whether it’s through infection and vaccine or just vaccine alone,” Dr. Pepper said. During the Pandemic More Teens Experienced Symptoms of Depression